A woman responded to a post I had made on a blog, which was also an example from my Bible study, Between the Window and the Door. 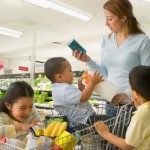 You have seen this as well. A woman at the check-out line with her kids grabbing at the candy and snacks asking her to include them in her shopping. But, I noticed something different in one mother’s reaction. After several “No’s” and “What did I tell you?” responses, she gently slipped herself between the kids and the candy, blocking their view.

She pointed her finger and they began to watch the checker as she swept their food items over the scanner. Attention diverted. But one kid continued to pout.

I said this was a good example of how sometimes God answers our whining questions.  If we have not heard His “No”, then He may wedge something between us and what we think we want so as to divert our attention. That is why sometimes the door closes, so to speak. But, will our response be jutting out our lower lip, or a wide-eyed eagerness to see what He is showing us instead?

A commenter asked, “What about the parable of the persistent widow?”  I have heard so many people use that parable as a reason to keep praying for something. I don’t think that is it’s intent.

We must take the parable in context and read the whole thing. It is found in Luke 18.  The widow kept pleaded to the judge for justice and fairness in her plight. Eventually he figured listening to her was better than turning a deaf ear to her.

Is that how you perceive God responding to your prayers? Even Jesus says absolutely not. Here is what he does say-

“and will not God bring about justice for his chosen ones who cry out to Him day and night?” (vs.7)

He is talking about justice, not our hopes and desires. The parable gives a specific example, not a blanket permission.  Even at the end of it, Jesus sees how his words might be misinterpreted. He concludes with this –

We must have faith, not only in God’s ability to answer us but in His answer. Yes, we can pray until we hear an answer, but we must also listen for it. It maybe “Not now”  or an absolute “NO!” Our response should be “Yes, Sir” in a tone of acceptance showing we have the faith that God knows best. Jesus is asking if we will still have faith in God and His timing when we are treated unjustly as the widow was.

Do we truly believe in God’s promises to protect us and that He desires the best for us, His chosen? He is the ultimate judge. Justice is in His hands. That is what Jesus was saying. I don’t think the parable allows us to view God as a Santa Claus , who if we whine and plead long enough, gives in and give us our whims and wishes.

Tell me what you think.