Taste and see that the LORD is good. Oh, the joys of those who take refuge in him! Psalm 34:8

Have you ever eaten a freshly steamed artichoke? I remember my first one. 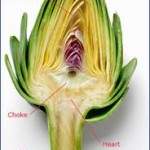 After dowsing the first outside leaf in lemon butter, careful not to get pricked by the tiny thorn at the end, I scraped my teeth across a tough outer edge only to barely get a tongue-full of flavor. But it was enough to make me want some more. I grabbed the next leaf and did the same. Then the next leaf, and the next. The leaves became more tender with a bit more tasty flesh.

Then, sure I was nearing the heart of the artichoke, I instead hit the fibrous, inedible fuzz, called the “choke”. To get to the heart, the most delicious part, I had to scrape away all the gunk first.

How tempted I was to give up. I’d had a bit of scrumptiousness. The lemon butter and artichoke flesh still sat on my taste buds. Perhaps that was enough. I began to justify my plight. Maybe these fibers were a warning. I should stay away and not dig into them. What lay beneath may not be as tasty as I thought it was. Maybe the heart was rotten or tough.

I thought about my life as an artichoke.
First, there are the little thorns that prick us as we try to get to the good stuff. Those are trials and tribulations. Nothing good comes easy, right?

Then there’s the small blessings, like the tiny amount of flesh scraped from an artichoke leaf. But, the more we taste God’s goodness, the more we recognize it in our lives and want it.

But mostly, I realized all the things that separated me from fully receiving God’s blessings had to first be arduously and carefully removed, like the choke. It’s easy to become entangled in the inedible fibers of life and then give up hope of ever reaching the good stuff.

Isn’t it funny how we can twist things around? I turned my desire not to delve into the hard work of removing the fibrous part of my life which choked me from God’s goodness into His telling me I didn’t deserve any more.  He blocked my going further for a reason. I should be thankful I had experienced as much of His goodness as I had. As if on a cross-stitched sampler, my thoughts saw the platitude—Don’t be greedy. Be thankful for what you’ve received from God so far.

To my surprise, God helped me peel away each layer of choke. He provided the proper tools and gave me step by step instructions. Together we tackled what had become entangled in my life.  Little by little, more goodness emerged. I could see we were making progress.

The more I think about it, the more I’ m awed by His gentleness, His patience, and His careful guiding. Hindsight, being twenty-twenty, I see that now.  But when I was in the middle of it, all I could see was the fuzzy choke. I thought I’d never get to the heart at the end. In fact, a few times I scooted away and said I’d had enough.

Then my soul’s stomach would growl. Feed me. With a deep sigh I knew I couldn’t shove this arduous task aside and start on a new issue, until this task was accomplished and the lessons were learned. That’s not the way God prefers to work in our lives.

So, once again I scooted towards the plate and began to remove the prickly fibers, confident that underneath lay the heart of the matter—a deeper relationship with God, and with those around me. In the back of my mind, I heard the reassuring voice saying, “Atta girl. Keep at it. Taste my goodness.”

Excerpt from her Bible study: Between the Window and the Door.