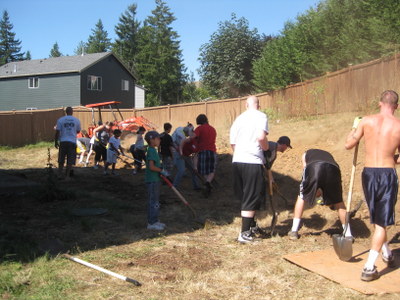 As you may know, my friend Carrie and I embarked on a project to get her very large backyard landscaped through faith and a fairly small budget. On that first day, I decided that the word for the project was “epic.” It became our “epic” project, and everyone involved thought that was a most fitting adjective.

It was quite an amazing first day. I, the complete novice in landscaping of this magnitude, (although I’m a very serious gardener) thought foolishly that with the amount of people who showed up–about 25–that we could have it done in a day. Ha!

Carrie’s backyard is about 1/2 acre, so she had 52 cubic yards (which totals 4 dump truck loads) of topsoil dumped on her driveway, and well into the cul-de-sac. Then, a flatbed loaded with pallets of 828 bricks for a retaining wall arrived, and since it was early and there were only about 6 of us who had arrived, we unloaded each of those 35-pound bricks by hand. (The company who delivered it did not have a forklift.)

The driver of the flatbed then informed us that we really needed crushed rock to set the first rows of the retaining walls. Although Carrie and I were sure we’d thought of everything, we hadn’t thought of that. By this time, more people had arrived, and a neighbor who lives 2 streets over, who didn’t even know Carrie previously, stepped forward and offered to pay the $150 for the 4 yards of crushed rock needed. Amazing. The crushed rock arrived about an hour and a half later.

Our backhoe had also arrived, and one of the men did an awesome job of driving the backhoe, and began the work of carving out terraces from a sloped backyard. By midday, about 25 of us were there with shovels, rakes and wheelbarrows.

Throughout the next 2 days, I stood in awe of how hard everyone worked. By the end of day 1, we had the bottom long retaining wall built, and a second upper one started. Still, there was at least half of the dirt remaining out in front of her house. When the second day dawned, a handful of hardy souls returned again, while a fresh set of people also arrived. The day was just as grueling, as we worked to install the second long retaining wall. Another neighbor stepped forward to man the backhoe.

Because the backhoe couldn’t get all the way to the end of the retaining walls to dump dirt, a lot of grunt work was required with wheelbarrows and shoveling. We also began raking out the area where her grass would grow, installing edging, and backfilling the upper retaining wall.

By the end of Day 2, our other neighbor Tyke was still running dirt to the backyard with the backhoe until after dark. He had to get up at 2 a.m. the next morning to go to work. To my great surprise and absolute admiration, he returned home around noon on Monday (Labor Day), and immediately picked up a broom and started sweeping off the remaining dirt and dust from the sidewalk and street.

Tyke, along with 2 of the other guys who showed up, is twenty-something. The three of them worked harder than anyone else, and we began to call them the Eveready bunnies.

I believe all of us took something away from this “epic” event. We got to know each other a lot more intimately. We got to know names we didn’t know before. We also got to know neighbors who live a few streets down, and came to lend a hand. We came to see each other in a completely different light…as people who can depend on each other and who really care.

I came away with yet another lesson from God on making snap judgments of others. (This is an ongoing lesson God seems to have to teach me throughout my life.) Before this weekend, I had chatted with Tyke a few times, but had not known his name, and because he has the most perfect lawn on the street, Carrie and I had dubbed him “the perfect lawn guy.” Now I see him as a truly terrific young man. Another man, who always seemed very shy and soft-spoken, and who seemed hard to get to know, was there longer than just about anyone. He worked tirelessly. His name is Nate, and we’re now on comfortable speaking terms.

And here’s another lovely result of the epic project. I met my fairly-new neighbor from across the street. She is divorced and lives with a divorced girlfriend, and they moved in about six months ago. I was so busy trying to get my oldest daughter through her senior year last year, I didn’t go over and introduce myself. Her name is Monica. So when I went to the new church I’m attending on Sunday (I left my previous mega church in search of a smaller, more intimate setting), I turned to see Monica there, arms outstretched for a hug, her eyes lit up in a happy, surprised smile. We had met only a week before, and had no idea we would attend the same church. But God did. She has been attending the church for years; I’m the newcomer.

Monica and I saw each other the next day on our street, and decided to carpool to church from now on. How cool is that? I have been asking God to give me community in my new town where we’ve lived for 2 years, and He is doing that, one lovely neighbor at a time.

What an epic project, with blessing heaped upon blessing. It all began with faith and one foot forward. Praise God from whom all blessings flow.