I read a devotional* by another writer named Brenda Miller who was so burdened by life that she felt God could not help her. Then she realized she could not come to Him carrying her burdens, but had to first put them down.

Have you ever seen a movie or commercial of a grown child coming home?  The son or daughter sees their parent eagerly waiting on the porch, sets down their suitcase or duffel bag, and rushes into their parent’s wide opened arms. Being embraced in that loving warmth is more important than their worldly belongings left on the sidewalk.

That is how I picture the father of the prodigal son. Except the son had nothing other than his tail tucked between his legs, so to speak. The father had everything and was willing to share it with his child. But the prodigal son had to make the effort to come to his father first. Are we any different with God?

It is more difficult to feel the warmth of God’s embrace when there is a lot of stuff in our arms. Picture the same child who doesn’t lay down the suitcase, and also has their arms loaded with dirty laundry. When the parent goes to enclose them in a hug, what is between them? All that stuff. The grown child can barely feel their mom or dad’s embrace – maybe just fingertips stretching around to grasp their child’s shoulders.

But if the son or daughter drops it all at the parent’s feet first, then they can nestle into that long-awaited embrace and fully feel the love generating from the parent. They can hear the parent’s heart beating for them, feel them breathe in and out in joyous sobs, and  totally wrap their arms around their mom or dad for a brief moment of bolstered security – a real live, heartfelt mutual hug. It is the same for us with our perfect, loving Heavenly Father. 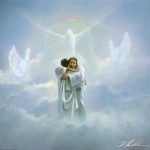 you last came to God, He is there waiting. He wants to fully embrace you and comfort you. His arms are open wide with anticipation.  His eyes beckon – “Drop it all child and rush into my arms.”