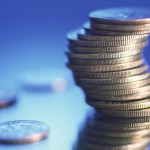 When the Federal Mint started issuing the State Quarters in 1999, my  husband and I bought a little folder to house them all.  Yesterday, we finally got “Hawaii”. Now we have all 54- including DC, Puerto Rico, Samoa and the Virgin Island coins.  So, when I read this passage today, something struck me about Jesus’ words.

On the Roman coin was a picture of Caesar and an inscription to him. The coin honored him, claiming all the money in Rome was essentially his property to take at any time. He was just letting the people use it to pay taxes to him.  But as Christians, we see all things as the property of God, our creator and Heavenly Father.   Jesus was basically asking them to determine where their loyalties lay. Today, He asks the same of you and of me.

Our coins in the US typically honor a historical person or a symbol of our freedom. But they are not the coins of the realm, because there is no kingdom here. They are not the government’s property, but that of the people of this democracy.  We elect people in government to help us spend these coins and manage them. We pay taxes so our roads can be serviced, the poor cared for, our children educated ( or so it is supposed to be- but that’s another topic all together, isn’t it?) , and our troops equipped to defend us.  But, the money is still rendered unto us, We the People.

Perhaps, that is why our founding fathers, in their wisdom, placed  four  simple yet profound words on every coin – In God We Trust.  Perhaps, they too had this passage in Matthew and this lesson from Jesus in mind.  It’s like saying, remember to whom you, this land and everything else belongs. Maybe, it is a message we need to clarify today.