I have two cats, as different as night and day. 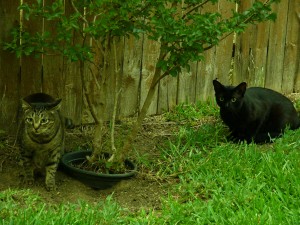 The black cat is fairly independent. The vet believes he was on his own for almost a year before we took him in, fed him regularly and gave him his toy mice and favorite blanket. He still has a tendency to fend for himself. He is a loner, who only meows when it is more than a half hour after his mealtime, and even then it is a simple syllable mew.  Only occasionally does he hop up and feel the need to snuggle and be close. Most of the time he is content to just be in the same vicinity and purrs happily if you happen to come by and pat his head.

The striped gray one – he is the eldest and the most needy. For all twelve years of this kitty’s life so far, as my son claims, we have had to “re-adopt him” every morning, and then at least six more times during the day. He has to be within an arms reach of me when I am home. He is always in my face demanding that he be my only attention. Yet, he is also snuggly and sweet.

Which of these cats describes you when it comes to your relationship with God? Do you treat Him as a distant provider and only occasionally go to Him 0r are you always tugging on His robe like an incessant toddler, whining for His attention?

Most of us are somewhere in between the two extremes.  Just as most of us are a bit like Martha and a bit like Mary.  In our walk on this earth, may we all come to be balanced in our trust that He will meet our needs and yet willing to rush into His arms and lean on His strength and wisdom.