As he [Jesus] went away from there, the scribes and the Pharisees began to press him hard and to provoke him to speak about many things, lying in wait for him, to catch him in something he might say. (Luke 11:53-54 ESV)

But it is more than that – it reaches to the very core of our nation. Believing what Jesus taught is not the standard. As strangers in a strange land, believers are always being watched. In countries where the freedom of religion is suppressed, their very lives can be in danger if they try to practice their faith. For most of us Westerners, we just feel more like a square peg in a round hole – our lifestyles just don’t fit with the rest of society.

There was a time when that did not seem to be the case. Our founding fathers openly spoke of God and put the Ten Commandments in the Supreme Court as a reminder to the judges of what they should base their opinions upon.  They stamped “In God We Trust”  on the coins so we’d remember all comes from Him first, and declared in our Pledge of Allegiance that we were, as a republic, under God.  Churches were in center of the community, both physically and spiritually. We swore on Bibles when we said we’d tell the truth in  court. Merchants closed their doors on Sunday so all could attend worship and have a day of rest.

How times have changed, right?  Or have they? The Ten Commandments still hang in the Supreme Court. Our coinage still bears that saying and our Pledge still says we are under God, though movements keep cropping up to change both of those things.

I believe it is time to reclaim our nation and let freedom of religion ring.  It starts with voting for candidates who feel the same way, honor God, regularly attend worship, believe in Israel, and understand our nation’s foundational principles and traditions.

Let the scribes and the Pharisees watch and lay traps. Our God handled them when He was on earth. He will handle them today. It is time to be bold and reclaim this land. Hear what Joshua warned the Hebrews centuries ago as they began to reclaim the land of their forefathers, Abraham, Issac and Jacob which was inundated with idol worshipers: 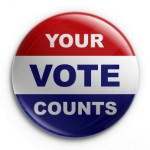 Choose by voting next Tuesday (or this week if you can early vote) whom you will pick to serve you based on who they choose to serve  – locally, at the state level, and on Capitol Hill.