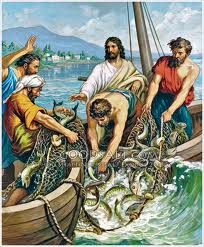 In the past, when I read about the miracle of the drawing in of fish, I concentrated on that- the miracle. In fact, I have a picture of it hanging in my bedroom. It shows Jesus standing in the boat as Simon Peter and his workers, who had fished all night in the waters that they knew like the back of their hand yet came up empty,  tugging to haul in the weight of so many fish bulging from their nets. That is when Jesus tells them they would be fishers of men and they drop their nets to follow Him.

Today, I read Luke’s account. The first part jumped out at me.

On one occasion, while the crowd was pressing in on him to hear the word of God, he was standing by the lake of Gennesaret, and he saw two boats by the lake, but the fishermen had gone out of them and were washing their nets. Getting into one of the boats, which was Simon’s, he asked him to put out a little from the land. And he sat down and taught the people from the boat. And when he had finished speaking, he said to Simon, “Put out into the deep and let down your nets for a catch.” And Simon answered, “Master, we toiled all night and took nothing! But at your word I will let down the nets.” (Luke 5:1-5 ESV)

While the crowd was pressing in on Jesus to hear the Truth, Simon and his workers were washing their nets, dead-tired and disappointed.  Their boats were empty – no fish for their labor. Nothing to show for their aching backs and shoulders, sweaty brows and throbbing feet.

Have you been there? I have. It seems whatever I do, it is not enough. I come up empty, tired and frustrated. The fruits of my labor are just not visible.  Why even try?

But look what Jesus does. He steps inside their empty boats and calls Simon to join Him and row Him out a bit so He can be heard over the crowd. Better acoustics on the water.  And there, a captive audience, Peter and his workers listen to Jesus. When Jesus asks them to go back and fish again, Peter whines a bit. Don’t you realize we have been doing that all night?  But, then he says, “By your word I will let down my nets.” What Jesus had spoken was enough to convince Peter that He was a wise and holy authority. It was just enough to produce a small amount of faith in Peter.

If you feel empty, allow Jesus to step into your boat. Do what little He requires, even though you are tired, spent and aching inside. Row out just a bit, carrying Him in your daily life. Then stop and listen to His wisdom.  It may be just enough to convince you that you want Him to stay in the boat and to build up trust that He will lead you to a more abundant place.

Jesus spoke first, then asked Peter to head out. Would Peter have done it otherwise? Scripture doesn’t say. We do know that after listening to the Truth, Peter was convinced enough to give it one more try and follow this holy man’s lead. Then, once Jesus demonstrated the miracle in Peter’s life by helping him accomplish what Peter couldn’t do by himself, Peter dropped everything to follow Him. The cool part? Jesus probably, because of the catch of fish, set Peter’s wife and family financially for the next three years that would follow. All those crowds of people who waited on the shore were hungry and eager to buy fish. (But that is a lesson for another devo, isn’t it?)

My point is this – Do you trust Him enough to let Him in your boat? That is all He is requiring of you- a chance to prove Himself in your life.