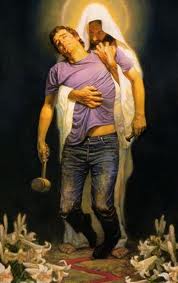 A friend of mine had a bomb dropped into her life a few days ago. Her daughter recently left for college and she was cleaning out her high school backpack, and she came across a long letter written to a lover of the same gender. The letter was very descriptive of sexual encounters they’d had over a period of time.

It took my friend by complete surprise. She is a Christian and pretty savvy about things, and now she’s dealing with the emotional fallout. She’s always trusted her daughter implicitly, and like so many teenagers, her daughter had “her stuff,” but she had always believed her daughter had a good moral compass. Now she’s not only coping with the fact that her daughter lied to her, but that she engaged in sex of a perverse nature.

She called her daughter at college who was terribly embarrassed to know her mother had found the letter. Her daughter emphatically stated that it was a phase and that she was not gay, but now there’s a wall of shame and disappointment and distrust between them. On top of that, my friend feels as though God has let her down. She has always lifted her children up to God daily for protection, guidance, and even saying the words, “Lead them not into temptation but deliver them from evil.”

It’s a painful, painful thing when your children walk straight into sin, even when they know and have been taught that it is wrong, and has consequences. As a parent, you want to shoulder their burdens. You want to take their guilt upon yourself, feeling that somewhere you went wrong. But as my friend and I talked about it and prayed over it, she began to realize that it was a choice her daughter made, the consequences of which she would have to endure. Jesus did not expect her to shoulder her daughter’s sins. At one point, when my friend was truly distraught, she asked the Lord to “stand here please,” and then she cupped her hands and imagined her daughter and her sins in her hands, and she bent down and placed them at Jesus’ feet. She vowed that she would leave her daughter with Jesus and she would not pick her up again. She would continue to pray for her daily, but she would no longer let it cast a shadow over her joy.

It was the beginning of healing for her. She has called me since then to say she still has her moments. When she looks at pictures of her daughter, she looks at her differently now. Loving her is now a very intentional act, because she knows that she needs to be the face of Jesus to her daughter, who is dealing with her own shame. This is where the rubber meets the road for parents, where we have to let our children make mistakes, both big and small, and learn to practice active love and forgiveness, and pray, pray and pray again.

It’s also helpful to dig into the recesses of our own past, and realize that we have skeletons in our own closet. We have memories we are ashamed of. We have made our own share of big and small mistakes.

We are not meant to carry around our sins or the sins of our children. It is simply too heavy a burden. That is why Jesus said, “Come to Me all who are weary and heavy-laden and I will give you rest.” (Matt. 11:28) Jesus alone is able to carry the burden and to redeem it. He alone can transform our children; we cannot.

So if you realize you’ve been bent over with the sins of your children, yourself, or someone else, lay them down at His feet and walk away. And pray with faith and gratitude that He will accomplish what concerns them. (Psalm 138:8)