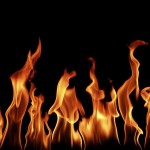 Happy Pentecost. It is celebrated in churches all over the world, and many wear red today to commemorate when the Holy Spirit descended upon the disciples and lay tongues of fire on their heads. Immediately the Tower of Babel was reversed. They began to speak in other languages. Acts 2:8-11 describes all the languages that were represented in Jerusalem since it was an international trade center. It could probably be compared to New York today and the disciples standing in Time Square. This small band of followers of a dead prophet suddenly ignited the world with the Truth -He is alive and can change lives. He is God.  They were all fired up over the news and couldn’t stop talking about it.  These twelve men and their converts would travel throughout the Roman Empire spreading the Word and eventually the whole empire would become Christian, though the resistance was fierce and all but one, John, were martyred for their fervor.

Brand new Christians have that fire in their hearts, don’t they. You can see it in their eyes. The name of Jesus is on the tips of their tongues. They burn with the Truth of grace and mercy.  They’re all fired up and wanting to tell the world what Christ has done in their lives.

But life goes on, and the fervency dies to a smoldering puff of smoke, barely visible. For some, it is threatened to be doused out for good by the disappointments of life. A lady wrote to me recently that she is so burned out by unanswered prayers that she can’t go to church any more. She is hurt and angry at God.

How do we recapture that fire? How do we keep the flame from dying and continue to be the Light to the world? It is not easy, but Jesus never said it would be. He only promised to send the Holy Spirit to comfort and guide us. He’s kept that promise, not only on the first day of Pentecost, but each day a new Christian receives Him into their hearts.  It is a fire that never can die, yet it can die down. But, dear friends,  through prayer, studying the Word and fellowshipping with other believers, it can be rekindled again and again.

A friend gave me a little votive with a cross on the frosted glass. Inside is a flame which flickers thanks to a small round battery. To get it to glow, I just have to turn it over and flip the switch.  The Holy Spirit is your battery to your perpetual flame – except He never gives out because the love of God keeps Him going strong. (Even stronger than that pink bunny).

You may, however, have your life turned over in order to get turned on and fired up about Jesus again. Expect it. Then go tell the world.